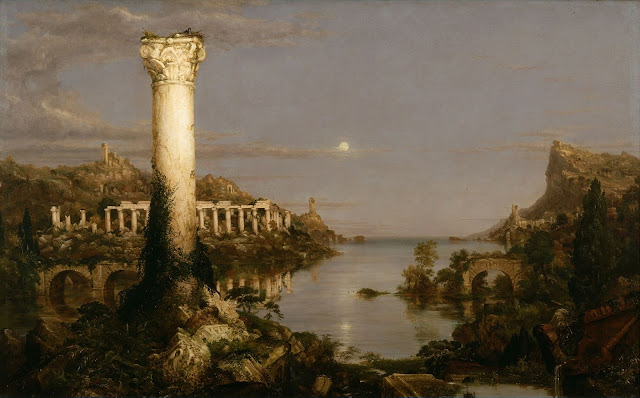 One of the nice things about having a blog and job security is that I can just make things up. So here's my sense of the recent historical trajectory of what can broadly be called analytic philosophy, and what I think that says about the current moment. Analytic philosophy is a degenerating research programme . It's been quite a long time since there was anything like a shared project of analysing key concepts or a mutual commitment to the linguistic turn . But the lack of such shared projects in themselves didn't really cause a problem for the field --  here's a discussion of Rorty cheerfully noting, in 1982, that analytic philosophy is held together mainly by a certain kind of style and sociological bonds among its practitioners. He didn't think it was a problem, and this  more detailed but equally sympathetic metaphilosophical analysis comes to a broadly similar conclusion. It also doesn't strike me that there is any particular institutional crisis for anal
11 comments
Read more

My Work is Bad

February 03, 2021
A brief explanation of why all my work is bad: `` What is the State of Blacks in Philosophy? '' -- it's actually my fault that there is a genuinely incoherent non-explanation of what statistics were done in this paper, which is all the more shocking and shameful since largely it was just super basic descriptive stuff -- graphs! On the whole fine for what it is but that's an incredibly basic thing.  `` Causally Interpreting Intersectionality Theory .'' -- the interest of a methodology piece is, of course, the results of applying the methodology. Years out and that's still never been done, despite the fact that this paper is cited a fair bit. People act as if this paper somehow does more work to vindicate intersectionality theory; they're vastly over-estimating how interesting it is. What's more, at least some of the reason the method is yet to actually be applied is that to get anything interesting it requires such large data sets as to perhaps
2 comments
Read more

A friend, comrade, and coauthor of mine has recently seen the light and decided to start identifying as a positivist. I thought his reasons for his conversion were interesting, and of course I am always keen to win converts for Carnap so I hope that by posting this others might be inspired. So read on, and if you too fall off your ass while listening to a positivism podcast feel free to send me your conversion story and maybe you can be next in this new series! -------------------------------------------- In 1957, a politician named Femi met Marie. Ọbafẹ́mi Awólọ́wọ̀ was born in the Colony and Protectorate of Southern Nigeria, which had recently been purchased by the British Crown from the Royal Niger Company. During his childhood, the Southern and Northern protectorates were combined into a single Nigerian colony, under the control of a single colonial Governor, with powers akin to a military dictator’s – the political culmination of five centuries of European commercial pursuits in
2 comments
Read more

Afro-Pessimism and the Instantiation Thesis

January 30, 2021
If you've been following debates within cultural studies at all over the past few years you've probably heard about Afro-Pessimism. Being a controversial thesis it has been  much discussed and often maligned and often unfairly. I am going to, in this post, criticise what seems to be an element of it -- but I do so partly because I think it warrants more attention from philosophers of the social sciences, and we're an odd bunch who I think pay attention to things when they are criticisable. But I don't want to contribute to the general pattern of misrepresenting it (though I do in fact almost entirely disagree with it as I understand it) and am very very very far from expert, so really I think interested readers should check out this introduction, and the associated text available here . It is on the basis of reading these, plus participating in or observing a number of informal conversations (and watching the odd lecture available online) that I comment, but I cannot s
9 comments
Read more

Against Progress and Best Explanations

January 29, 2021
There are stubborn dissenters from modern scientific consensuses that we take to be socially important, and philosophers say we should like to show that we are in some sense really doing better than them. Think of climate change sceptics, or evolution denialists, anti-vaxxers, etc.  This has been pointed out to me as a means of motivating philosophers' projects to develop an account of scientific progress which vindicates our sense that we are doing objectively better than the ancients, or past scientists more broadly. And, relatedly, this is purportedly why we should want an account of scientific theory choice that makes it such that there is a unique best procedure for picking out favoured theories given evidence, or at least that people are pretty severely restrained in what they are allowed to still do and count as being properly scientific. Short post on why I don't find this a convincing rationale for such projects. First, it's a misidentification of the real source
Post a Comment
Read more 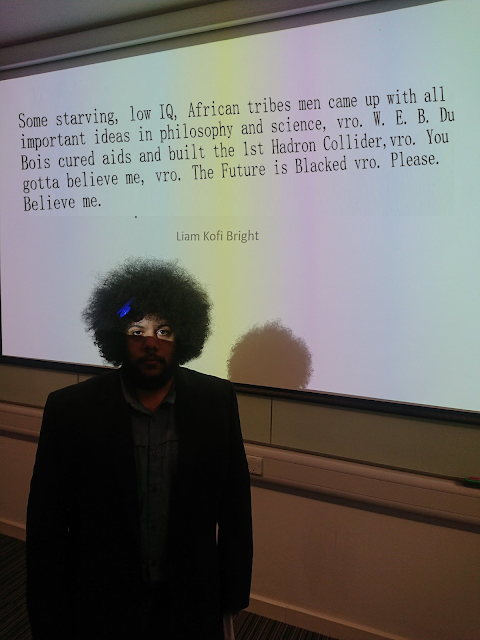 Let me explain the above image to you. An anonymous account on twitter made it, this account largely dedicated to saying very right wing things of a certain racist sort about philosophy and being annoyed at those who do not. The idea is that the words on the screen characterise my thinking and work. In other posts they clarified that they had seen me say I am interested in and intend to develop ideas from Africana philosophy, and from this drawn the conclusion (or perhaps further bolstered their confidence in the conclusion) that I am low IQ and wrong about everything, and also that the pictured quote would well summarise my view.  Now far be it from me to dispute that I am low IQ and wrong about everything, and even if I did that is surely exactly what someone who is low IQ and wrong about everything would say! So I shan't dispute the characterisation here. Readers can judge for themselves whether it is plausible that I think nothing of value has been done by non African thinke
13 comments
Read more

Call Me Maybe - An Analysis & Defence

I have spent today clearing out old files, and came across a detailed analysis I onnce wrote of the rationality of  the main character in Carly Rae Jepsen's Call Me, Maybe . Start your 2021 off right by seeing what 2012 me thought could be said in defence of the rational good standing of this pop song classic. -------- Recently a friend brought my attention to the following analysis (see this as well) of the hit song Call Me Maybe by Carly Rae Jepsen. I think both analyses quite fundamentally mistaken, and since I am a fan of the song I think it deserves better. So here’s my own crack at the whip. Note that I will follow the blog post in taking the song lyrics as canonical, rather than events as they (amusingly) transpire in the video. My problem with both of the above analyses is: they use game theory, rather than individual decision theory. Now at first this might seem crazy – isn’t it obvious that the situation involves (at least) two rational agents, with the outcome depende
8 comments
Read more
More posts